David: “Ummy! Ummy! Ummy!!!” Running (in his mind) as fast as his chubby legs can carry him 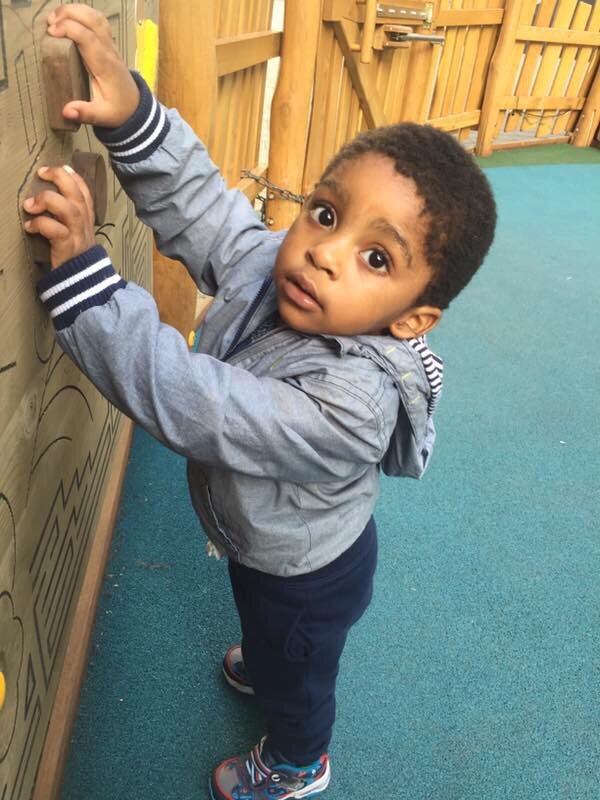 Dassah: “Aaaaaaaah! Mummy is back yay!” Hopping around dancing.

Music to my ears. I still remember when I would walk through my doors to dead silence. Today it feels surreal. How can I be a mother of three? Me? Mummy? Me?! Ummy? Me?! I’m still in shock.

So sometimes when I fall on my knees or my arms are outstretched in total adoration of this God my miracle worker. The God of whom I’ve tasted of his power I do it not caring who is around.

The God who would take me from a young girl with no hope of being a mother to this a mother of three amazing gifts from God.

Now I think about it. It was a process that only God could have taken me through. I kept getting instructions from the Holy Spirit on what to do, how to live and how to make sure I didn’t miss my season when it was my turn to testify.

What I try to do with Hannah’s Heart posts is to try to share some of the things I learnt on that journey. It was a  journey that I’m glad I didn’t let go to waste. I learnt a lot in that season. I paid attention and today I’m glad I did.

Let me share one of the major things God taught me that waiting season….

Isn’t it funny? I’m sure you were expecting to hear some deep revelations. Well no miracle is happening in your life without patience. I can guarantee you that.

Once it’s a promise from God you need the power twins of faith and patience to get it. Definitely no short cuts.

However I thought patience meant just waiting so when God showed me this scripture my resolve was simple…. okay Lord…

Because I had over time come to the realization that God is not a man and his promise was sure it was only a matter of time …it would happen at the right time.

So I kept holding on and focusing on God’s ability. Every time I read the Bible I was even more reassured of God not failing that it was only a matter of time

And I needed to just hold on and trust the process. Good things… God things take time.

How much more supernaturally good things like a miracle baby which you need to activate faith for. And like I told you earlier faith and patience work close together

So like I said before I resolved to wait

But at some point it started to feel awkward. So I went back to check the scriptures and God showed me that his focus was not on waiting but on patience. It’s through faith and patience; not faith and waiting.

What’s the difference you ask? Same thing I asked until he sent my mama to me 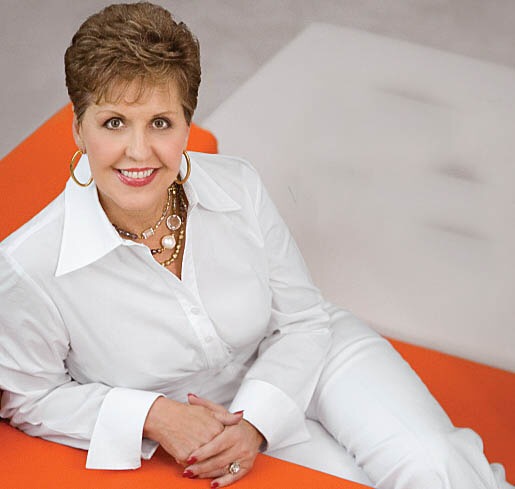 See I love Joyce Meyer. I’ve loved her since 1997 when I first stumbled on her. I bought a book beauty for ashes just because I liked the title and I love to read.

Oh my God was I blown away and from that day she became my go to. I read and listened to everything that had Joyce Meyer attached to it so of course most times when God wants to explain something to me he sends mama Joyce to me

So anyhow before I make this post about her …. which I should do some day. Hmmm…. blogpost brewing 😜

I couldn’t believe my ears. It’s not in the action ; it’s in the attitude!  Oh! My God!!! There I was thinking I was doing it right. Oh but trust mama she wasn’t done with me.

How was I acting? I started to do a quick check and I found out I was just standing around waiting and that meant I would be there a very long time

because God was trying to teach me patience not waiting …

and I found out they were two very different things. 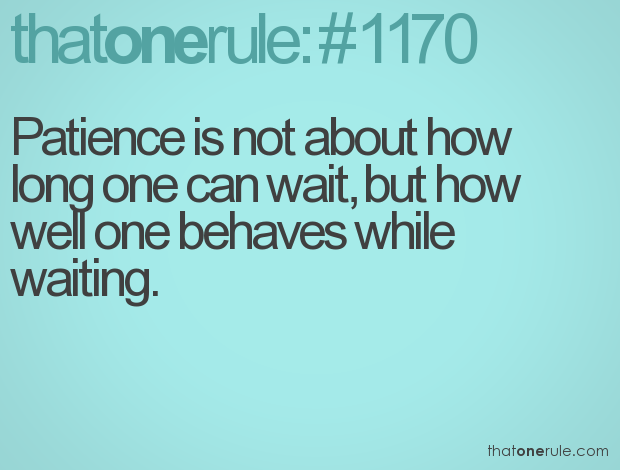 I found out I was doing a lot wrong and that in itself was slowing the process. I was waiting but was I patient? 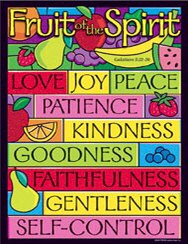 Have you noticed that patience is a fruit of the spirit?

If patience were simply waiting why do you need the Holy Spirit for that?  Waiting is a physical act while patience is a spiritual attitude. Anyone can wait but not everyone can be patient. It takes faith, a renewed mind and a regenerated spirit to have patience.

When I sat back to look over my years of waiting which had gone by I found out I may have finally gotten the faith part down but the patience was no where in sight. There were just somethings that were making it difficult for my faith to produce.

Let me give you a little analogy. I hope it will help. I love stories. Jesus did too. So he always explained things in pictures in the Bible ….and to me. So here goes my own parable 😂😂😂😂

There was a certain woman who was travelling with three of her friends. They all carpooled and drove to the airport at the same time. They were all travelling to the same place for the same event. They got to the airport on time and all bought plane tickets.

After thirty minutes they heard the announcement all those on Airfaith flight AF247 to babyland we are boarding now so please come forward with your boarding passes. Those with small children or our first class and business class passengers will board first. They all looked down at their boarding passes and discovered that even though they were headed in the same direction on the same airline,  they all had different flight schedules.

The woman realized that even though they were all on the same airline, all her friends were still flying before her. She also realized she had two options

Well all her friends left and she chose option two but after all her friends had left they discovered there was a problem with the last flight which was the plane she was supposed to get on. As soon it was announced all the other passengers who had been waiting to get on that flight got angry and began to lash out. Saying nasty things about the airline, about the owners of the airline. Getting violent with the attendants at the check in counters.

What did she do? She remained calm. She tried to calm others down and encourage them to trust that the airline would make alternative arrangements. Some wanted cash back and as soon as they got it bought tickets on less reputable airlines. She was patient. The situation around her; the chaos did not cause her to waiver. She sat patiently asking from time to time if there was any new development and if she needed to make any other adjustments.

Now what most of the other passengers did not know was that the owner of the airline was also scheduled to be on that flight as he was headed for the same event as the key note speaker. When the flight was cancelled he decided to use his private jet to convey as many of the passengers as he could who had to travel that day. When he called for passengers – she was the only one there so she got to fly first class to babyland and she got VIP seating at the event.

In conclusion let me tell you a bit about the other passengers who were waiting  till they heard the cancelled flight….

Unfortunately there were a lot of plane crashes that day as the other less reputable airlines like Airworks, Airdoubt and Aireffizy had discovered faults in their planes but had no integrity and refused to cancel flights so they wouldn’t lose money.

There were also a lot of stranded passengers that day as some other airlines overbooked and when the passengers got to where they would take their connecting flights they suddenly discovered that the airlines had overbooked and they had to stay in the airport. So they still missed the event.

Some others, the pilot changed his mind and took them to another destination. Why? Because he was the pilot and he was at the helm of affairs

I tried abi? 😂😂 this parable thing is not an easy something o! 😂 Much respect to Jesus Biko. As they say senior na senior 😂

So anyhow seriously though the question is how are you waiting?

If you are patient then you must have the right attitude.

You can’t say you have patience and you are…

No!!! You have to just trust that God is on top of things and get busy doing good works or other purposeful activities. 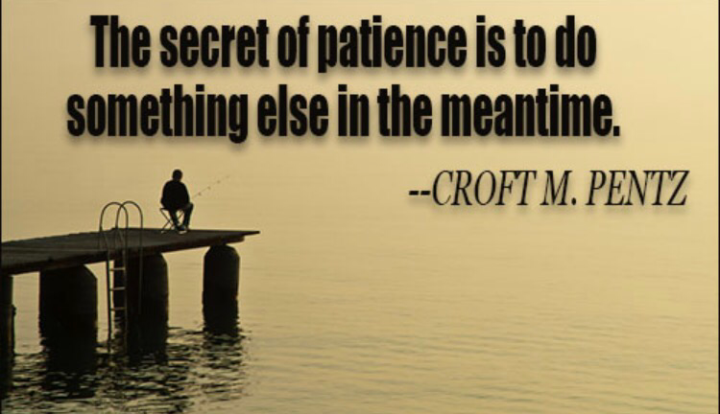 Just relax God is on top of it

I know it doesn’t feel like it right now but there are days when you will actually feel like dashing your kids out. Imagine I find myself praying this prayer today…

Because sometimes I’m so exhausted all I want to do is snap at them for being so needy of me 😂 and possibly ship them off to grandma for a year. Does that make me a bad mum? No!!! Does that mean I’m ungrateful? No!! Does that mean I love them any less? No!!! Would I rather not have them? No!!! No!!! No!!! It’s just the reality of life. You just don’t ever have enough hours in the day when you have kids.

So I thank God for the times I had before they came and I thank God I learnt this a few years before I actually became a mother.

Enjoy where you are now. One of the biggest lessons I’ve learnt from Joyce Meyer

Maybe I should do that blogpost after all…. hmmm…

Remember attitude is everything. God is more interested in getting you ready for the gift than he is getting the gift ready for you. Patience is so key in this journey. I hope I’ve been able to show you what it means to Wait Patiently.

This now is the conclusion of the matter today

Okay mummies. I gotta run. School starts on Monday need to do last minute preps. Can’t wait to start swapping school gist with you. I know it’s sooner than we think but until then let’s keep waiting patiently